You know you live in BFE when a visit to your local pumpkin patch involves driving a few miles out of town and going to someone's backyard (I can't make this stuff up). It probably was for the best because I'm not up yet to dealing with a huge commercial pumpkin farm, and because it was free, I didn't feel bad about not staying overly long. Ella had a fun time looking at all the pumpkins, although I suspect the appeal was more in that we had read about Curious George visiting a pumpkin patch. Marian was less than impressed.


Unfortunately our nice family morning ended up with Ella puking all over her crib during her nap. I would rather deal with any other form of illness than puke. I thought we were going to have a massive meltdown at bedtime because all her stuffed animals are now in the wash. Not a peep about her stuffed animals, which is how I know she must really feel crummy. She did, however, try to tuck her little pumpkin into bed.

Email ThisBlogThis!Share to TwitterShare to FacebookShare to Pinterest
Labels: Baby, Fun, Life on the Prairie, Toddler

Remember how in my last post I said I didn't think Schrodinger was inclined to come out any time soon? Ha, joke was on us. I wrote that post around 9:30 that night. We finished watching the football game (they lost) and turned on Doctor Who. Jim got me an ice cream sundae and I said to him, "If I end up actually going into labor tonight I'm sure I'm going to regret eating this." We stayed up until 12:30 finishing the serial we were on and went off to bed.

At 2am I woke up with stronger contractions than I had had to date, though they didn't seem particularly strong to me. They were coming fairly close together- 2-3 minutes apart- though they were only lasting about 30 seconds each. Regardless, around 2:40 I told Jim to call our midwife, Sarah, and our doula, Brooke, and have them start driving over, since we knew it would be about an hour or so before they would arrive. We fully expected them to come over, hang out for a while, and have my contractions stall out, as we had had several false alarms like that with Ella.

After he called them, Jim filled up our jacuzzi tub for me so I could relax a bit. My contractions weren't that bad but I definitely had to breathe through them. Between contractions I just sat back in the tub- the jets felt amazing. Meanwhile Jim worked on getting things ready for the delivery. He got the bed all set and started working on setting up the birth tub. While he was in the midst of getting the birth tub blown up, I started to feel really nauseated. He brought me over the trash can and I puked. After that point I told him to forget about the birth tub for a bit because I needed help with the contractions. They still weren't terrible but emotionally I didn't want to be alone and I needed him to coach me through them. In retrospect I was in transition at this point.

I remember asking Jim what time it was because I kept on thinking that I just had to hold on until Brooke and Sarah arrived. It was around 3:50 at this point. I told Jim I wanted to get out of the bath and go use the bathroom because the contractions were picking up and I thought I might not want to move again for a while. I sat down on the toilet and immediately felt like I needed to push. Jim told me in no uncertain terms that I could not give birth to the baby on the toilet and he helped me move to the bed.

Right at this point Brooke arrived. Jim told her I needed to push. She threw on some gloves and they got Sarah on the phone. Sarah was still about ten minutes away and suggested they help me onto my left side, as this would slow things down. I was on all fours at this point and when Jim tried to move me I'm pretty sure I yelled at him to get his hands off me and that I HAD to push. Everyone was super calm, despite the craziness. Sarah asked Brooke and Jim what they could see of the baby. They weren't quite sure, but they thought they were seeing the cord.

As soon as I heard the word "cord" I started to panic a bit and started swearing. Cord prolapse is one of those rare complications and even though it was statistically unlikely, I had been scared of it happening. They told me I had to get this baby out NOW and I got down to work.

Turns out, they actually were seeing her head, which became apparent with the next push. One push after that and her head was out, and then with another push she was born. Marian was delivered by her dad at exactly 4am. She came so quickly that her head was still completely round.

I picked her up and held her against my chest while we all had a "holy shit did that just happen?!" moment. It was about five minutes before any of us thought to check whether she was a boy or girl.

About ten minutes after she was born Sarah finally arrived. Things got a little dicey at this point because I was starting to lose a lot of blood. Sarah had been willing to wait for my placenta to deliver on its own, no matter how long that took, but with the amount of blood loss she decided we couldn't wait any longer. She gave me a shot of pitocin to help my uterus contract and hopefully get things going, and Brooke and Jim helped Marian latch on and nurse. After a few minutes my placenta started to come out- except for one piece that was stubbornly hanging on. Sarah had to manually extract that piece before my placenta fully delivered. That was a thousand times more painful than any other aspect of labor or delivery, but it stopped my bleeding. Even though it was horribly painful, I never felt frightened or worried because everyone was so calm. Sarah later told me that with the amount of blood I lost she would have normally sent me to the hospital and it was only because I was lucid, calm, and talking to them throughout the whole thing that she allowed me to stay at home. I think I was so high on the after-birth endorphins that it would have been impossible for me to be anything besides alert.

Other than the placenta issue my labor and delivery were a dream. Marian's birth was absolutely incredible and I felt amazing afterward. I got everything I wanted with it. I felt completely in charge and in control of everything, and just trusted my body to do what it was meant to do. Marian's birth made me feel strong and empowered- the way every woman should feel after doing the most awesome thing she will ever do.

Happy due date to me!

Posted by Unknown at 9:26 PM No comments:

Email ThisBlogThis!Share to TwitterShare to FacebookShare to Pinterest
Labels: Pregnancy

The joys of taking a toddler into a public restroom

I try to avoid public restrooms like the plague. But between being hugely pregnant and having a potty-training toddler, sometimes they are unavoidable.

It's bad enough trying to cram yourself, your toddler, and your fifteen-ton diaper bag into a tiny stall, all the while keeping up a litany of, "Don't touch the toilet. Don't touch the floor. Don't touch the garbage. Don't flush the toilet yet. No I don't need the entire roll of toilet paper. Don't try and crawl underneath to the next stall. STOP DO NOT OPEN UP THE DOOR CLOSE THAT DOOR UP RIGHT NOW" while trying to do your business.

You know what makes it worse?

When your toddler decides to narrate what you are doing. Loudly.

In Ella's world, all bodily functions are called "poo poo." Doesn't matter what you are actually doing. And recently, she has started to grasp the difference between "big" and "little."

What does that mean for using a public restroom?

My toddler likes to loudly announce to everyone else, "Big poo poo Mama!" over and over.

On top of that, she likes to inspect my underwear and proudly tell me, "Mama undies dry!" As if I too, occasionally pee my pants. Then she looks up at me expectantly until I confirm that yes, mommy's undies are dry.

Now on top of the ick factor of using a public restroom, I get to add public embarrassment.
Posted by Unknown at 3:41 PM No comments:

To October, that is.

No matter what, Schrodinger will be here by the end of the month!

I'm still feeling pretty good. Yesterday was the first day I woke up and thought, "Okay, I'm ready." Even so, I'm nowhere near as miserable as I was by this point with Ella and I don't care if Schrodinger wants to keep residence in my ute for a bit longer. Mostly I'm excited to get to finally meet this little person. Hopefully my next pregnancy update on here will be to say that the baby has arrived! 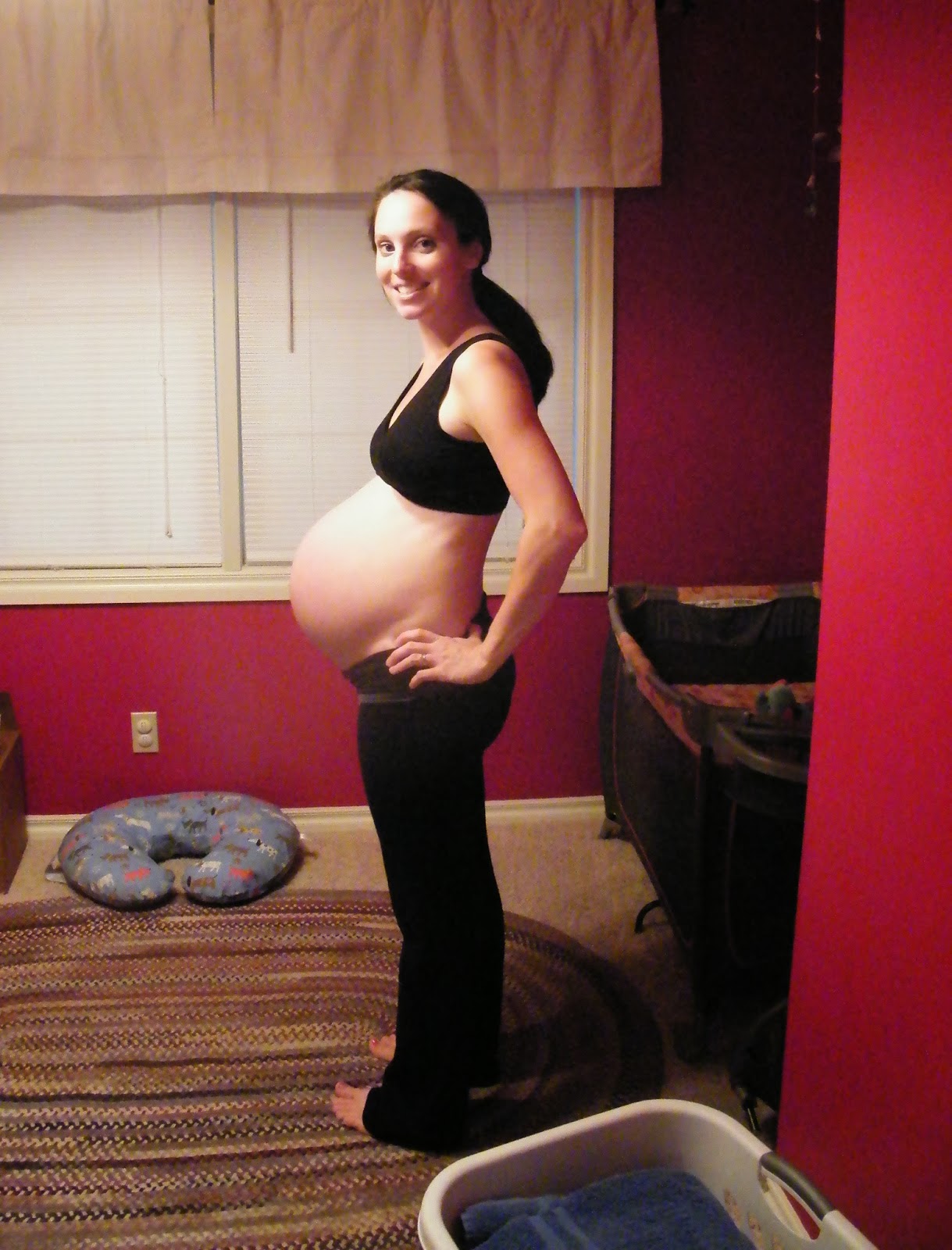 Email ThisBlogThis!Share to TwitterShare to FacebookShare to Pinterest
Labels: Pregnancy

Apparently George is an alcoholic chimp

She thinks about this for a minute. "Get George beer."

Reason #789579346 why having a toddler is awesome. Frustrating at times, but awesome.
Posted by Unknown at 3:59 PM No comments: