Toddler vs airplane. Never has two hours felt so long.

Ella declaring, 'I need to go poop!' in the middle of turbulence, while I'm trying my darndest not to puke. And then since we couldn't get to the bathroom, proceeding to stink the place up.
In the natural course of events, then having to change a poopy diaper in the airplane bathroom on the world's tiniest changing table. With Marian sleeping in the ergo. Complete with the toddler throwing a fit as I'm trying to change her and the door swinging open.

The changing incident was apparently so loud and traumatic sounding that several people asked if I was okay and one person kindly gave Ella a bag of cookies as consolation.

And my favorite part, Ella deciding to use the airplane seat as a slide. While we were landing. As I'm nursing Marian and am thus forced to one-handedly attempt to get her back on the seat and re-buckled. 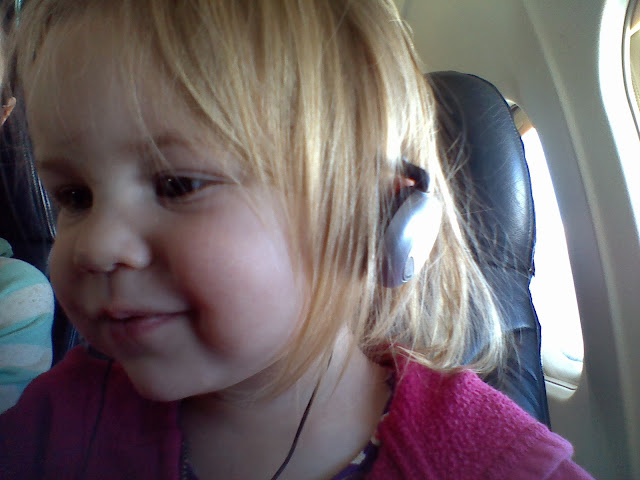 Posted by Unknown at 7:39 AM No comments:

Height: I don't have an official height so we're going with a guess of 26 inches. We'll see how far off I am at her next checkup or when I can find a tape measure, whichever comes first.

Diapers: Cloth, even at night. She's such a heavy wetter that I'm going to try using wool at night to see if that helps keep her dry.

Clothes: A mix of 6-9 and 9-12. I'm going to put it out there that big sister is in 2T and at the rate Marian is growing, they might be wearing the same clothes soon. I guess that might simplify things.

Sleep: We're still firmly entrenched in the crap sleeping. We're attempting to do some modified sleep training- mainly not rushing to get her when she starts fussing and instead giving her a few minutes to settle down. I've also been trying to only nurse her until she's drowsy and put her down still partially awake so she can learn to get herself to sleep. It's tough though.

On the plus side of sleep issues, we bit the bullet and got her out of the rock and play. She forced our hand by learning how to sit up in it. Now she's in the pack and play and sleeping flat on her back, although she can roll over to her side or belly if she chooses. The plan is to have her start napping in the crib when we get back from our trip in a few weeks. Ideally we'd be switching her up to the crib fully in the next few weeks but I'm not trudging up and down the stairs several times a night. So until she learns to sleep through the night she's staying in our room.

Feedings: She's put herself on a pretty decent schedule for eating during the day. Usually every 2-3 hours. I can tell she's flirting with the idea of doing longer stretches and with getting herself on the 2-3-4 schedule, but we're not quite there yet.

Milestones: Working on sitting up unassisted- she can do it for about 10 seconds now before toppling over. She's trying really hard to sit up on her own from lying down. She figured out how to roll continuously to get to what she wants, and can inchworm/army crawl. And to top it all off, she managed to get herself up on hands and knees- didn't go anywhere, but still. Two mobile children! Oy vey! At least she can't get very far or go very fast.

Miscellaneous: She loves playing little sing-song type of games, like "Row Row Row Your Boat" or "Ring Around the Rosie" (Ella likes holding hands and playing with her sister, especially the falling down part). She is so amused by her own reflection and making silly faces in the mirror. She also has discovered the joy in sticking out her tongue and the awesomeness that are her feet. Overall she has such a happy little personality, although she is quite determined to get what she wants.

As a bonus, here's a video of her giggling.

In my last post I mentioned my love of Lenten Fish Fries. I forgot until this morning that along with Fish Fries, Lent also brings one of my most hated foods: canned tuna fish.

If you didn't already know, Catholics are supposed to abstain from eating meat on Fridays in Lent, as well as Ash Wednesday and Good Friday. I tend to solve this problem by eating a vegetarian meal or having some sort of fish filet. Jim tends to solve this by making tuna fish sandwiches.

I have several issues with canned tuna fish.

1. It comes in a can that looks like it could be mistaken for cat food (which, in my opinion, it probably is)

2. It looks like something my toddler ate then spit out

3. It makes the entire house reek and requires hours of fumigation/gas masks/candles to get rid of the smell

4. It is generally paired with one of my other most hated foods, celery

5. Tuna can be absolutely delicious when it is served properly (mmm, ahi tuna) and it's insulting to me that someone decided to turn something scrumptious into a pile of cat puke

Every year I debate whether canned tuna fish is too much of a price to pay for the crispy greasy goodness of Friday Fish Fry. Maybe in true Catholic fashion I should just offer it up.
Posted by Unknown at 8:54 PM No comments:

I'm celebrating Fat Tuesday by being a fatass and consuming a piece of cherry pie. It's all for the greater good. Although I won't be fasting tomorrow (I'm sure God and the pope understand I have to consume 5000000 calories a day while nursing), I feel that at the very least I can give up eating sweets for a day. Plus, Jim will be fasting and I won't be inconsiderate and eat pie in front of him while he is hungry (you're welcome). I mean, someone has to eat this thing before it goes bad, right?

In the past month Ella has seemed to do a lot of growing up all at once.

Exhibit A: The big girl bed

I had been dreading the transition from the crib to the big girl bed and hoped to delay it as long as possible. About six months ago we had turned the crib around so the higher back was facing the front, which seemed to discourage any attempts at climbing out. Then the inevitable happened: she figured out she could climb out the side. Jim caught her straddling the side rail, pretending she was riding a horse or something like that. He says she seemed to scared to try and get out all the way. Regardless, she could have fallen out so the time had come.

Since we already had two twin beds, we decided to skip the toddler bed and go straight to the twin mattress. I had thought about putting it on the floor, but (a) that was too much work, (b) she was going to have to learn to sleep in a real bed eventually, and (c) I thought being up high might discourage her from getting down and running amok (yeah, that worked for maybe a day).

It's been kind of a rough transition. I made a big deal of moving all her stuff to the new bedroom, letting her pick out sheets, etc. Even so, she still cried a lot and asked to go back to the crib. The past few days, however, she seems to be very into the whole "I'm a big girl" thing and talks about how the crib is for babies and how her old bedroom is the baby room. Baby, er, big girl steps, right?

We had been taking Ella to the potty whenever she asked or if we thought she needed to go, but hadn't been pushing it as she has been dealing with some terrible constipation. Last week, though, she decided to fully commit to it. After breakfast she asked to wear big girl undies then proceeded to be accident-free all day. The only time she had an accident all week was at school. The weekend was kind of rough because she was incredibly constipated again. But today she seems to be back on track with the bathroom. Per the pediatrician's recommendation we're trying some Miralax every day, and hopefully that will solve the issue.

Up until two weeks ago, all her dolls and stuffed animals had pretty simple names. Doggy. Baby. Girl. New Baby. Striped Baby. You get the idea. Her stuffed Curious George was the only exception, and that was most likely due to the fact he came pre-named.

All of a sudden she came up with random names for some of the toys. Her dog is occasionally what sounds like Trudy. Where she heard the name Trudy is beyond me. Of course, that might not be what she's really saying. And one of the stuffed rabbits is now Silas. That one I at least sort of get because a boy in her class is called Silas.

Then at nap time today, as I was snuggling with her, she requested I start calling her Eleanor. She said it enough times that I guess she's pretty serious about it.

At least for today. Because in true toddler fashion, she could change her mind tomorrow. After all, as much as she says she's a big girl, she is only two.