This blog is about our adventures (and misadventures) as a crunchy, nerdy family living out on the prairie. It's a mishmash of things- vignettes from our day to day life, projects we are working on, random thoughts going through my head- you name it, I'll probably write about it. Much of it is centered on all things baby, because let's face it, when you are a parent, the vast majority of your life consists of diapers and drool. 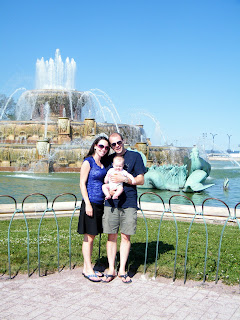 Here's how we looked when this blog began, at Buckingham Fountain in downtown Chicago. Ella is about six months old.

I'm Elise, a stay-at-home-mom to my daughters, Eleanor and Marian. Before Ella was born, I was an anthropologist, but decided that the life of academia was no longer for me. I grew up in Florida and moved to the Midwest for undergrad, stayed on for grad school, and after almost a decade there, traded in the big city life for life on prairie.

My husband, Jim, is an inorganic chemist. He's into beer, Boston sports, and pretty much all things nerdy. We met in 2006 at Northwestern, got married in 2010, and our daughter, Eleanor (or Ella, as she's mostly called) was born in December 2011. Marian joined us in October 2013.

Our life is thinly-veiled chaos. Our house is a jumbled collection of academic journals, Star Trek movies, partially-disassembled computers, fermenting beer, and baby toys, but I wouldn't have it any other way.