Things are growing! Some a lot better than others.

Here's the herb garden plus garlic. We let Ella plant a whole bunch of the seeds. You would never know, right? 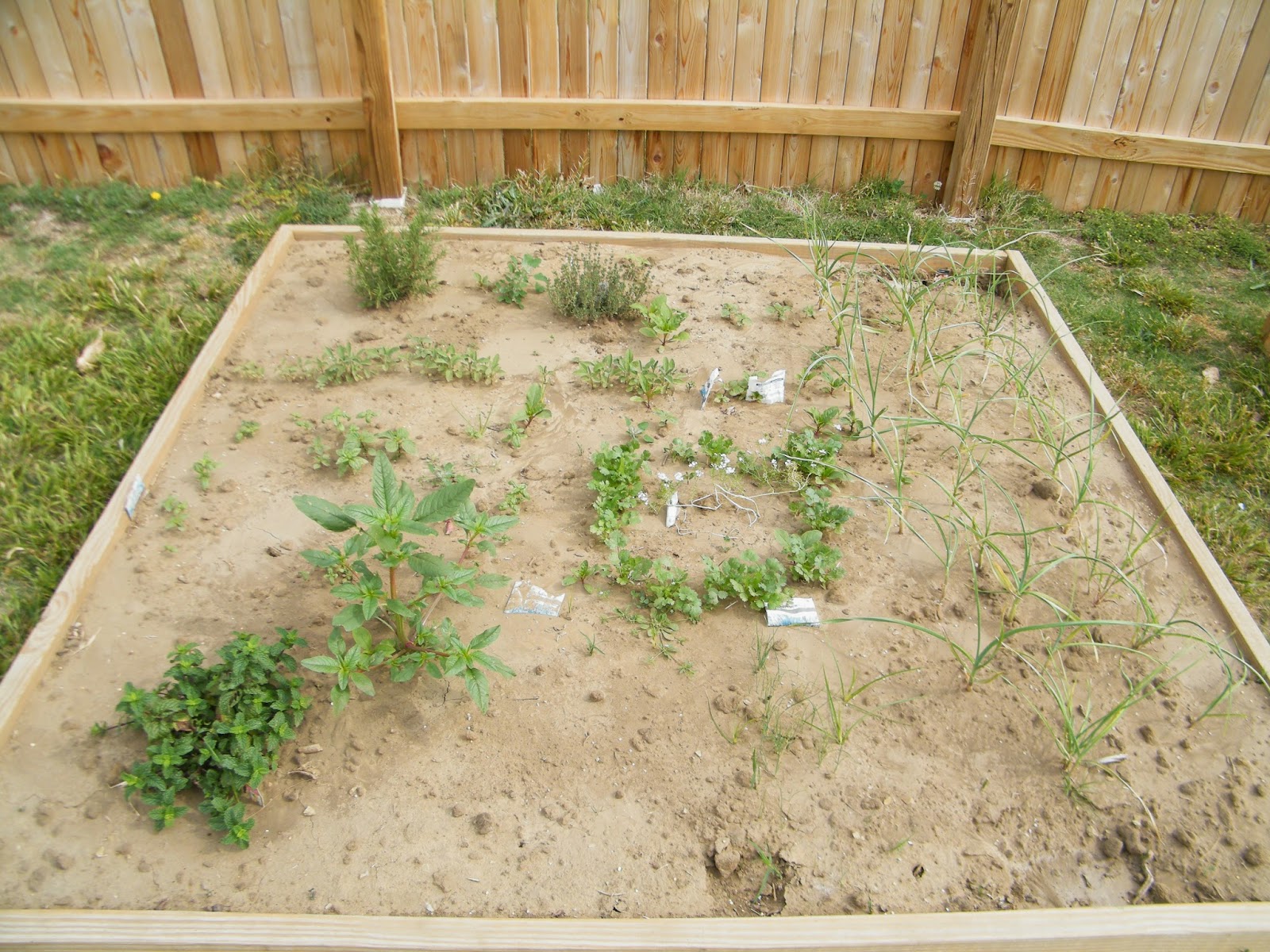 Some of our veggies are doing better than others. The spinach and radishes are doing amazing. I actually harvested a whole bunch of radishes after this picture was taken. Sadly, our broccoli had an unfortunate meeting with the toddler ("Here you go Mama. I pick BIG WEEDS for you!"). Right now it is still limping along. 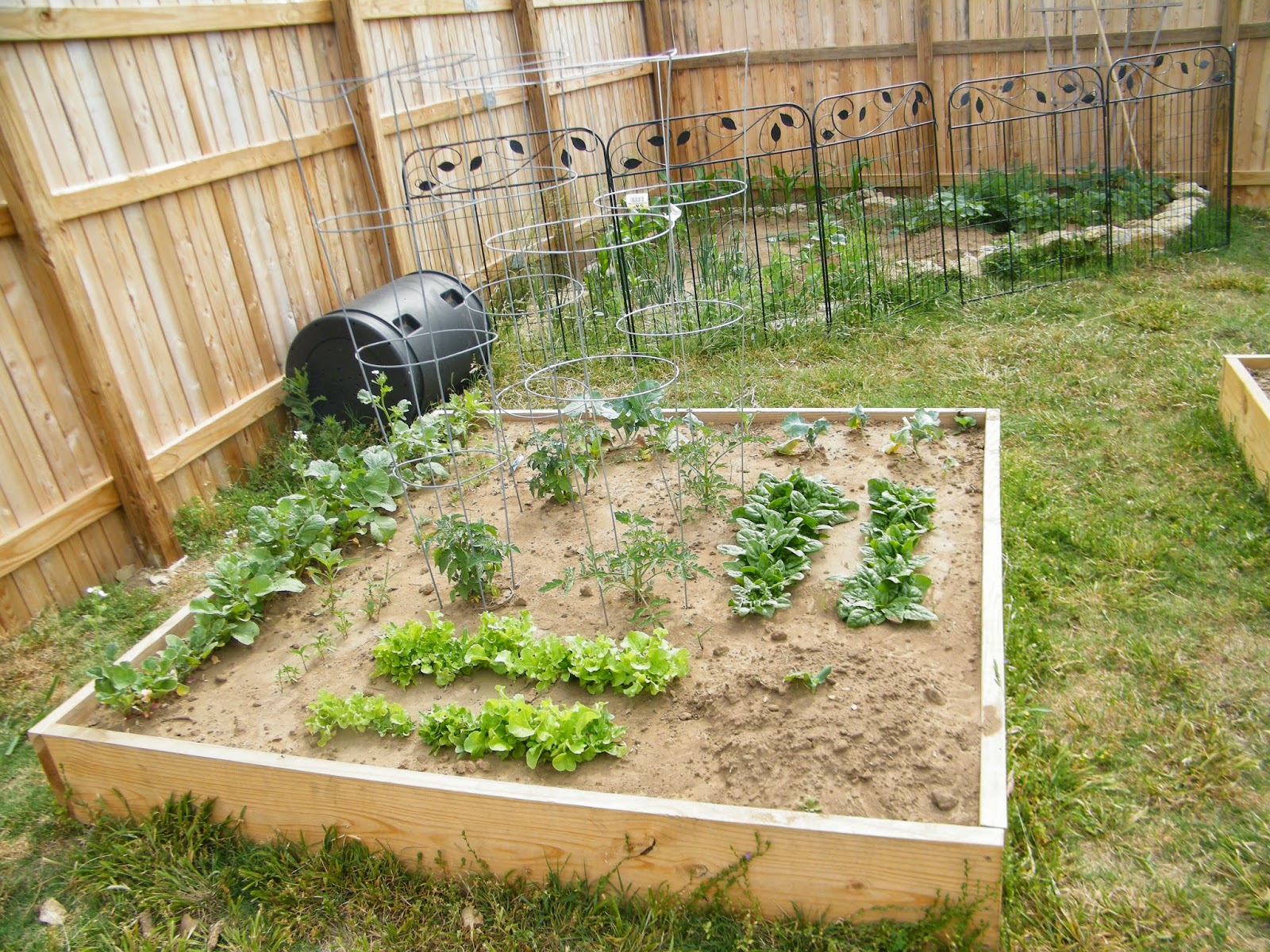 During my visit to Raleigh Jim decided to put in another bed. We have a few more tomatoes, peppers, and some extra onions in here. The chili pepper plants actually have some small peppers growing. Ella planted some pepper seeds which may have sprouted. Or they may be weeds. Too small yet to tell, although she insists they are her pepper seeds. Hopefully she's right! 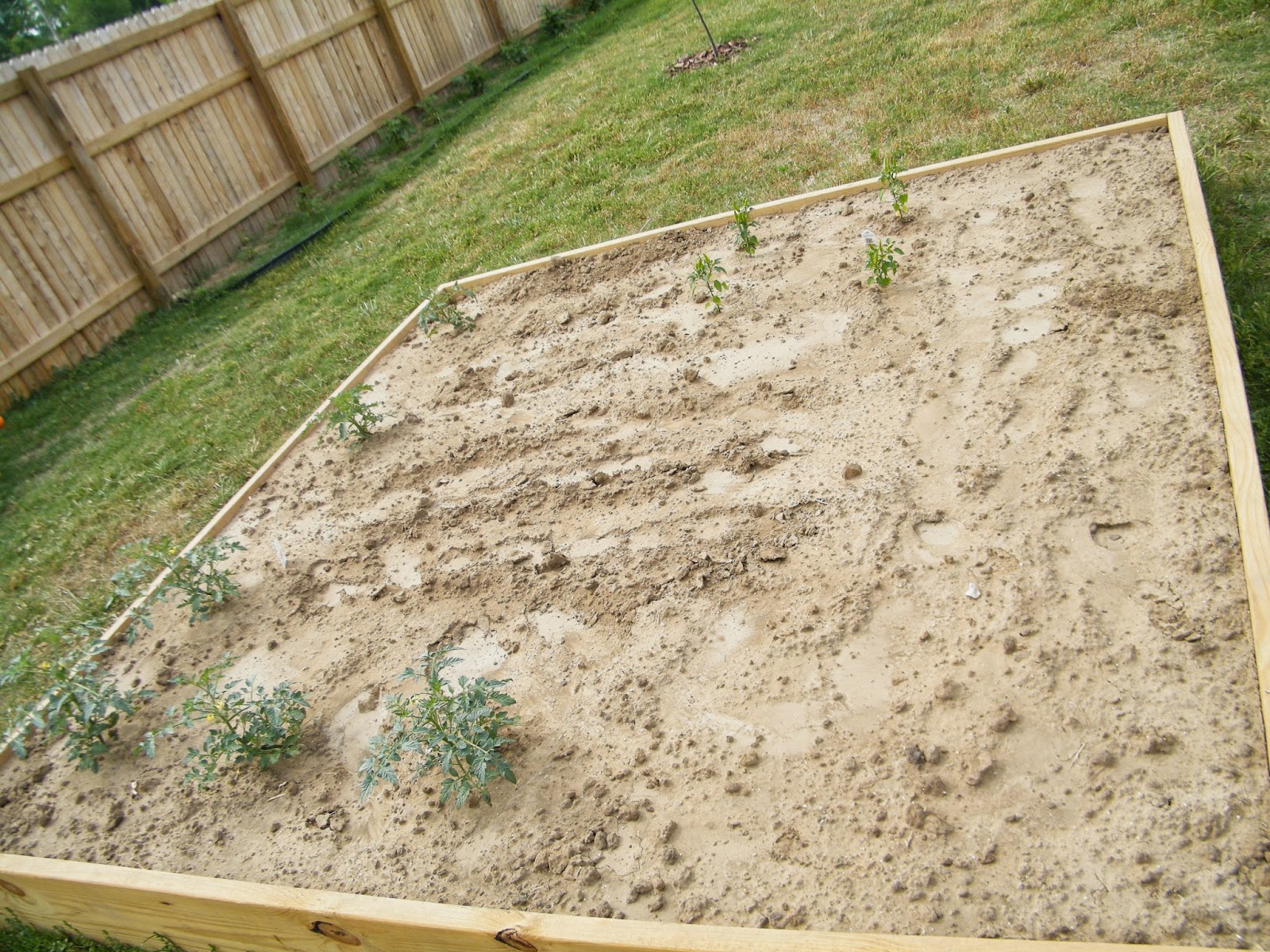 There's a whole bunch of stuff growing in the rock garden bed- onions, beans, carrots, peas, corn, artichokes, and I *think* some squash (next year we are labeling). And of course, weeds. Pesky little buggers. 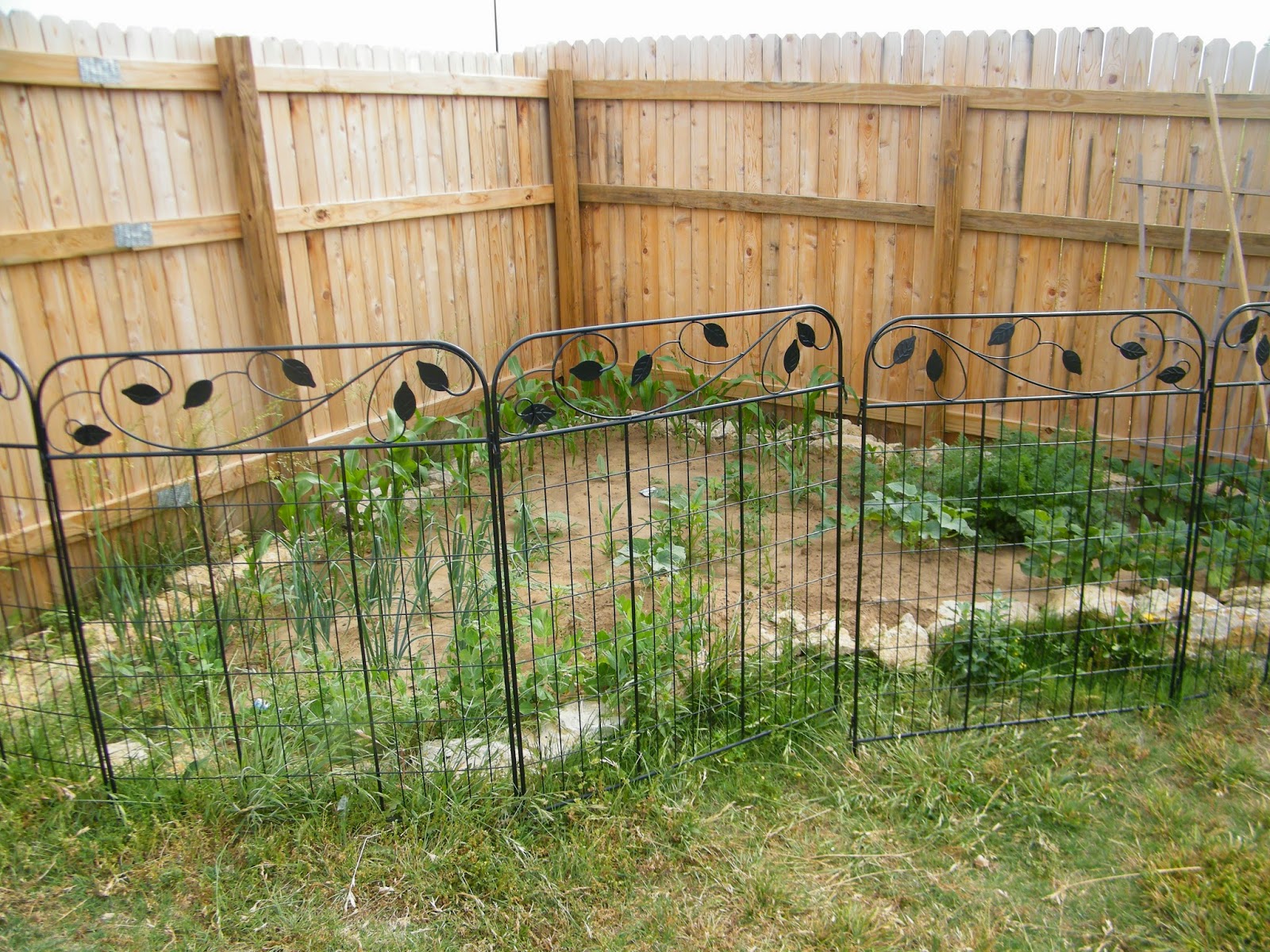 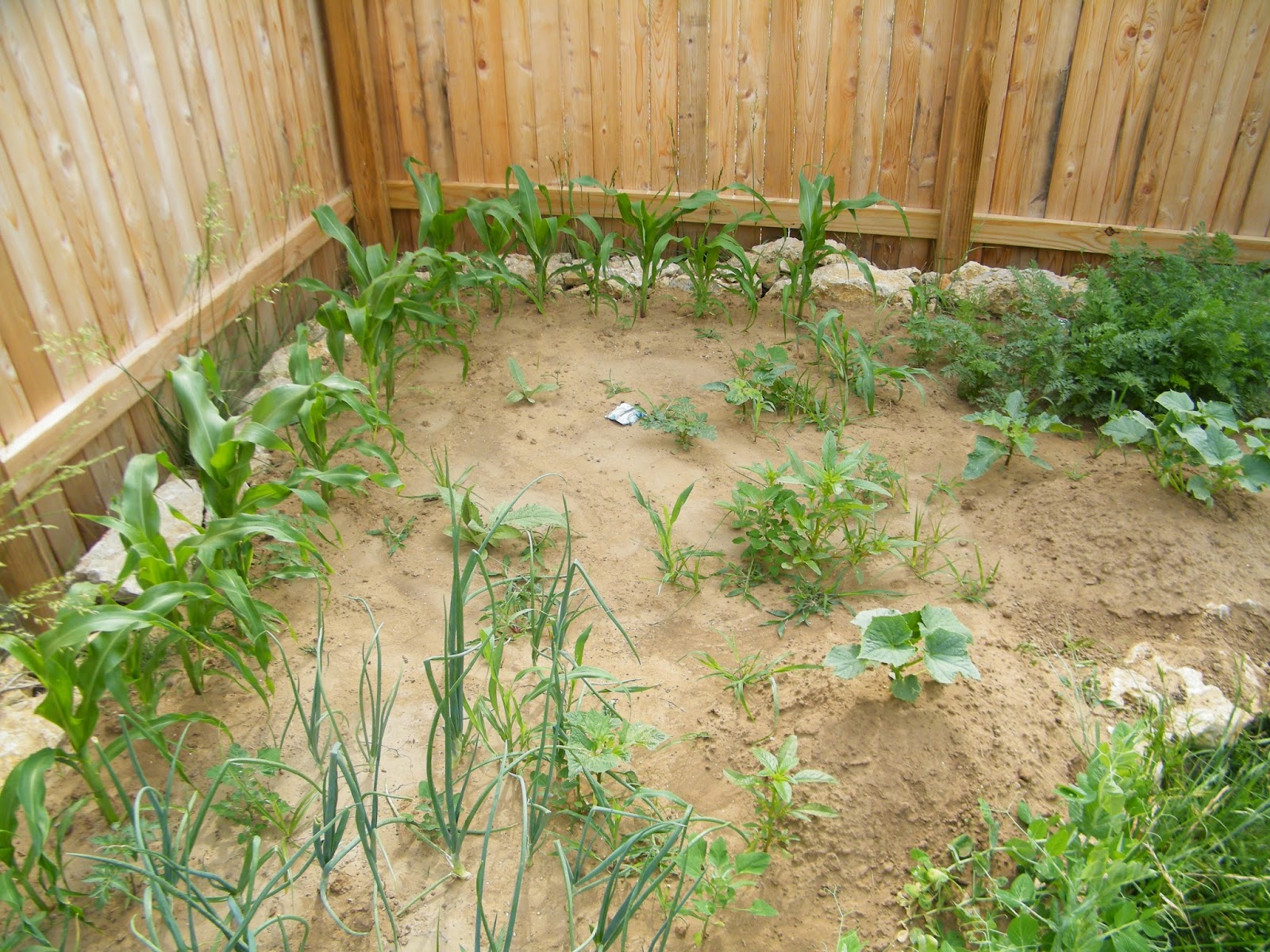 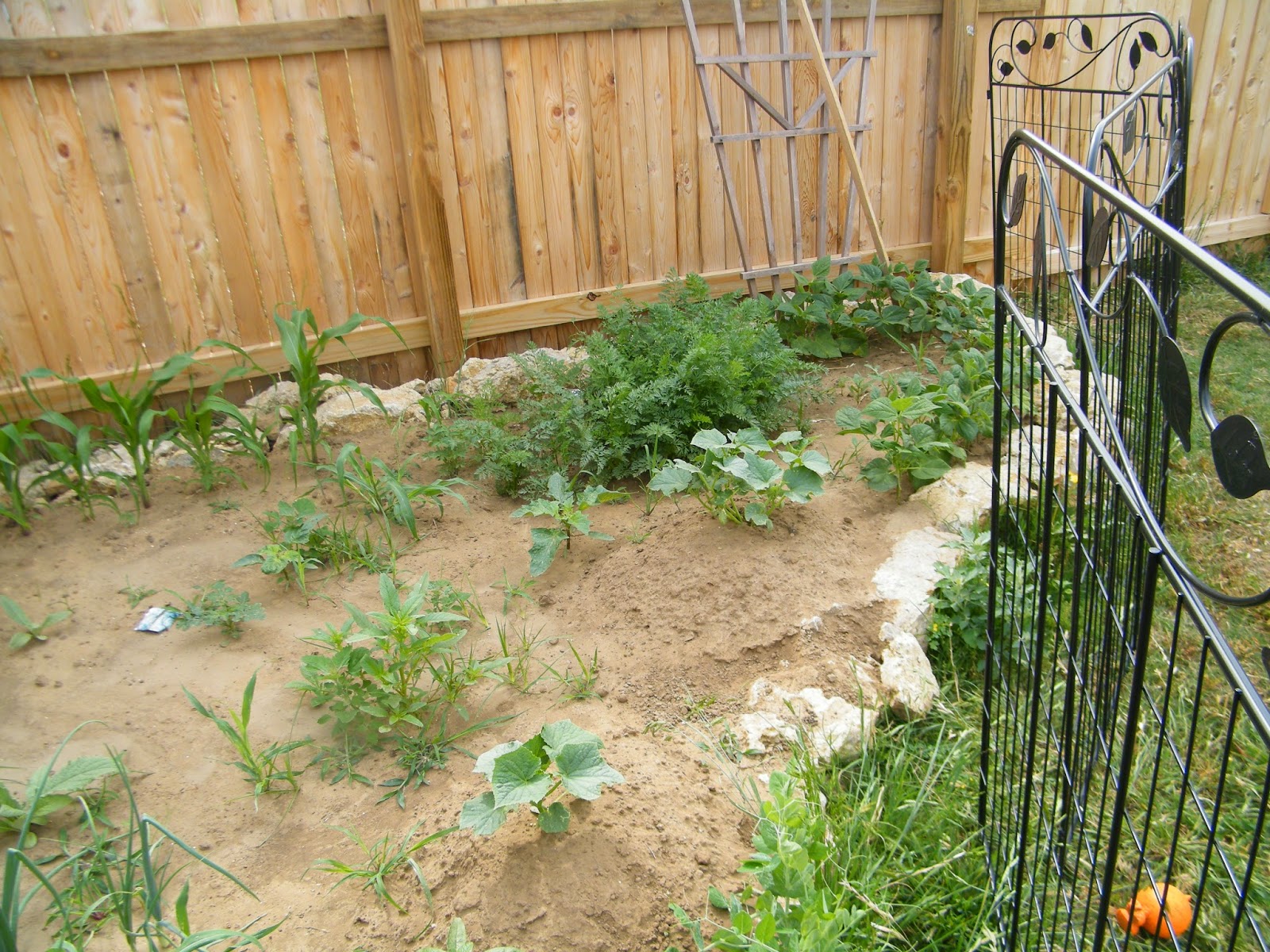 We also got a pleasant surprise- raspberries! We planted both early and late varieties of berries and weren't expecting to get much of anything this year. Then these little guys appeared. 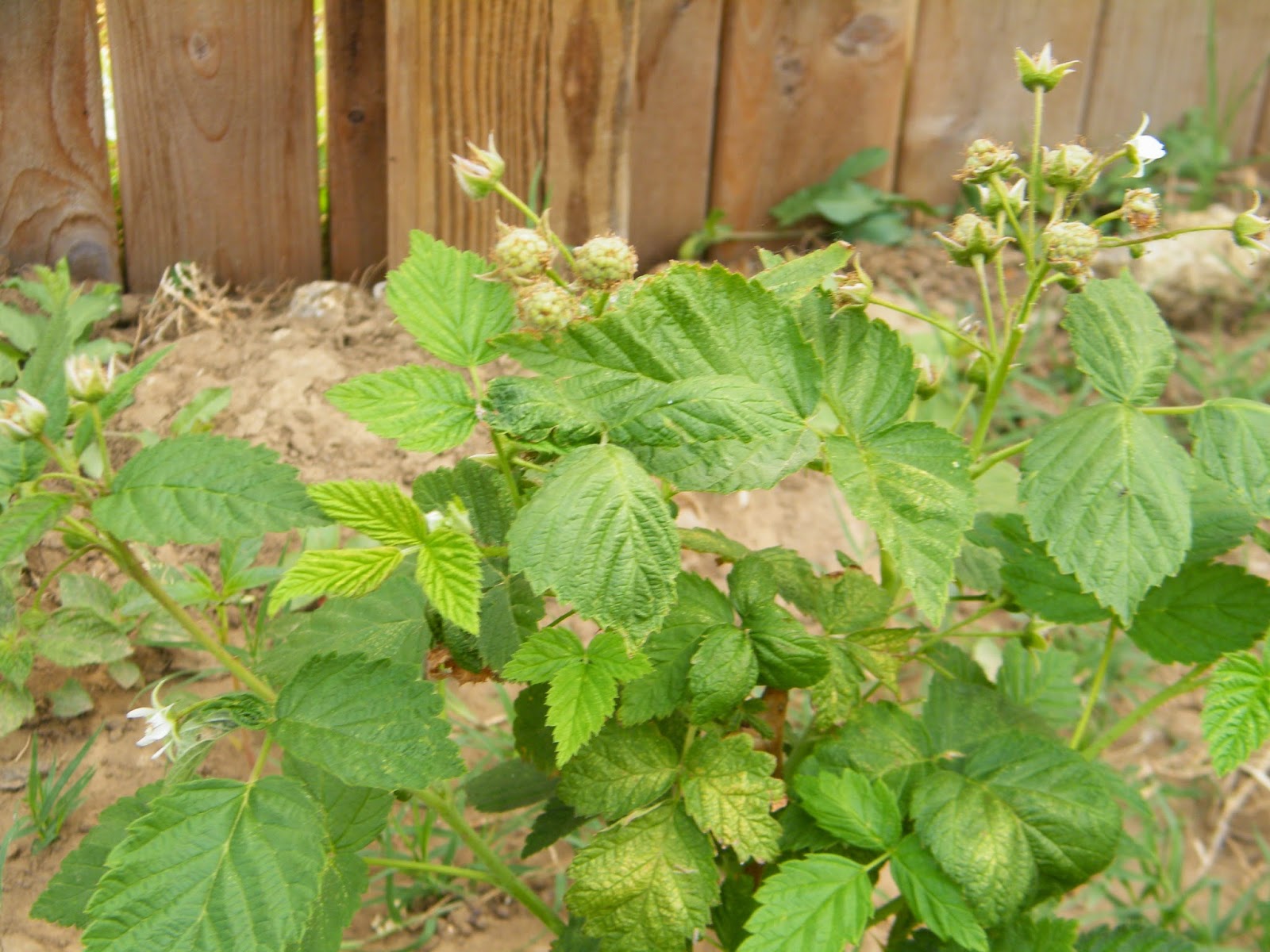 In other garden surprises- we have a family of robins! Ella found one of their eggshells yesterday and although we saw the nest, we couldn't spot any baby birds. The babies decided to put in an appearance this morning while the kids were playing on the swing set. I guess they got used to the racket and decided to peek out. We even got to see the mommy and daddy robins bringing them worms.

Email ThisBlogThis!Share to TwitterShare to FacebookShare to Pinterest
Labels: Home, Life on the Prairie, Toddler

It's official. She drank the purple kool aid.

The purple Frozen kool aid, that is.

Ella came up to me this morning and said, "Mama, do you want to build a snowman?"

Which would be cute. Except that it's 90 degrees out and my two year old literally wants to build a snowman. 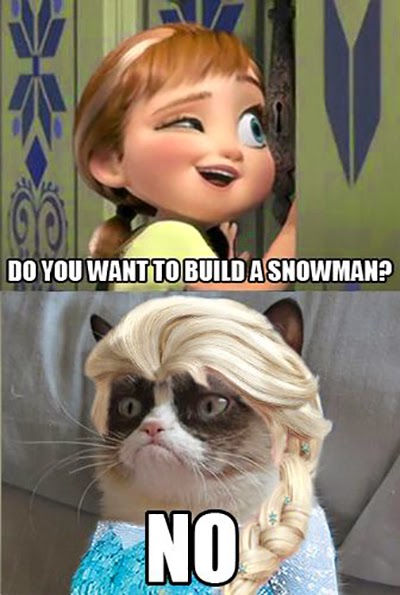 Seriously, what is with this movie that makes the toddler set nuts?!
Posted by Unknown at 8:56 AM 1 comment:

Email ThisBlogThis!Share to TwitterShare to FacebookShare to Pinterest
Labels: Toddler

I am pretty positive that I have selective mommy memory. There are certain aspects of Ella's babyhood that I seemed to have conveniently forgotten- until Marian was in the midst of doing the same thing. Or I lied to myself and told myself it wasn't so bad.

Like how I somehow forgot the awful period of time when Ella was a newborn and refused to sleep or stop screaming unless she was being held and we used to have to take turns rocking her. I'd be so tired that I would have to stand up while holding her and I would wake Jim up at the point where I was literally falling asleep on my feet. We'd do that in 15 minute shifts all.night.long.

Yet until we had a newborn again I had blotted that from my mind. All I remembered was how wonderfully Ella slept until she hit about 5 months old.

Here are the things I erased from my mind about the whole mobile baby process:

-They put tons of random shit in their mouths. Like little pieces of fuzz and hair and dog toys and the cheerios your toddler left on the floor.

-They somehow manage to find every single little thing they aren't supposed to play with. My kids seem to love the dogs toys. Maybe the fact that they have been pre-slobbered makes them more attractive.

-Cleaning your floors on a daily basis becomes an absolute necessity. Because otherwise you end up completely disgusted at how much dirt and dog hair clings to their magnetic little hands. And dirty floors gives them more stuff to stick in their mouths.

-Babyproofing is like throwing down the gauntlet. "Oh, so you think I can't climb over the baby gate? Just watch me."

-They have this sixth sense for when your back is turned. Think you'll have time for that 30 second bathroom trip? Think again.


The worst part is I know once Marian is a bit older all the not-so-fun aspects will be a distant memory.

Here's a hodge-podge post of what's been going on here:

-Had an amazing weekend in Raleigh with one of my besties, Kristen from BeerCat Brewing. Almost four whole awesome days of gabbing non-stop. Being back there made me realize just how much I miss living on the East Coast and how much I wish we lived closer to one another. I have lots of friends here in BFE, but none that "get" me in the way Kristen does. I can't wait to have our next get-together.

-Came back from Raleigh and almost immediately got sick with viral pharyngitis. If you aren't familiar with it, it's like strep throat without the benefit of antibiotics. Plus the lovely addition of full body aches, chills, and hot flashes. I lost five pounds from not being able to eat anything besides ice cream for almost a week. During the worst of it I couldn't even drink water, but for whatever reason I could have ginger ale.

-Jim threw me an amazing Mother's Day weekend. Sushi? Check. Alcohol? Check. A date night so horrible that we can laugh about it for years to come? Check. (Note: my side-eyeing of events at the BFE Community Center is now completely justified.) Relaxing morning? Yep. Alcoholic beverages, ice cream, and not having to worry about a single meal? You bet. Super awesome craft "from the kiddos"? Oh yeah. Jim made me a super cute votive candle holder and then had the girls paint it. I know a lot of moms are like, "Eh, I don't want some craft from the kids, give me jewelry." I'm the opposite. I LOVE stuff that my kids make, especially when I'm not the one who has to come up with the activity, wrangle the kids into doing it, and then clean it all up.

-We had our first salad of the season made completely from stuff in our garden. Minus the cheese, of course. Because what is a salad without cheese?

Anyway, now that we are all mostly healthy again and things are semi-calm here, it'll be back to posting like normal.

Why is this month's update late? Well...look at this picture and figure out what I have been doing instead of updating the blog:

That's right folks. We now have two children who are busy getting into trouble.

Weight: Last time I weighed her on our super accurate scale, she was 16.5 lbs

Height: She's sleeping right now but I'll update once I get a chance to measure. ETA: As best I can tell, she is 27 inches. Measuring a super squirmy baby is hard!

Teeth: She has both central lower incisors. She's definitely working on some other teeth but no others show any signs of erupting soon.

Diapers: We've tried a couple of different things that have worked. Right now we are rotating through three nighttime diaper solutions: a wool diaper with a bamboo/hemp booster, a fitted diaper with bamboo/hemp inserts + cover, and a bamboo all in one deal. Most mornings she is waking up dry. Then again, I'm not sure if it's the diaper that is making the difference or the fact that she isn't nursing a gazillion times a night.

Clothes:  Nothing exciting here- still 6-9 and 9-12, with a few 12 month clothes that fit. We did have to break out bigger socks. Okay, I probably should have brought out the bigger socks like two months ago but I have a toddler who freaked out over Marian wearing "her" socks and since the baby didn't care...

Sleep: With the exception of my weekend in Raleigh, most nights she is only up once. Usually right around 4am, which means if I'm smart and go off to bed at a reasonable hour, I can have 6+ hours of sleep. Most days she takes two naps, although if Ella is noisy and wakes her up early from the afternoon nap she'll take a quick catnap before dinner.

Food: We're mostly doing baby-led weaning now, primarily because with two kids I've found it's much easier to plop the stuff down on her tray and let her feed herself. Jim reminded me about puffs, which are quite possibly the least nutritious baby food ever but does give her plenty of practice on her pincer grip. Still usually one meal a day, except on weekends when she'll have some breakfast with us. And of course she's nursing probably a dozen times a day. She's also working on drinking from a sippy cup. She needs some help but she is a thousand times better at drinking from a sippy cup than she ever was from a bottle.

Milestones: Marian is now a full-blown crawler. In a matter of days the kid went from being slow and hesitant to being crazy fast. I turn my back for a second and she is into mischief. New favorite activities for baby include trying to sneakily eat the dog toys, crawling through one of our end tables, and seeing how many of Ella's toys she can play with before her sister notices. New activity for Mommy includes lots of baby-proofing. (You may ask why our house isn't completely baby-proofed. Well, Ella was a year old when we moved in and could be trusted not to touch certain things.)

Since she learned to crawl- which was, oh, last week- she has moved onto cruising. I am guessing we're going to have another early walker.

Miscellaneous: With the crawling has come a decided preference over toys. It used to be that Ella could tell her "trade" or "switch" while grabbing toys out of her lap and as long as the toddler gave her another toy, all was right with the world. Now there is a lot of tug of war type stuff and shrieking.

Although they have devised a game that is mutually agreeable. Ella pretends Marian is a dog and throws a toy for her to fetch. Marian happily crawls across the floor and grabs it. And repeat. Part of me thinks I should explain to Ella that her sister is not a dog. But then the lazy part of me thinks, "Eh, I can get five minutes of peace" and praises them for playing nicely together.