Since a lot of people ask me about elimination communication, I thought I would write up something about our experiences with it. I am by far not an expert on it, so this is entirely my thoughts and opinions. If you want to get technical about it, we are a part-time EC family.

I can’t express to people how much I love cloth diapering. The environmental factors, the savings over disposables, the fact that my daughter has not had a single blow-out in one, and, of course, the cuteness factor (okay, a lot of it is the cuteness factor)- there are simply a million and one reasons why my husband and I prefer them over disposables. However, there is one part that I’m not so fond of, and I think most cloth-diapering parents would agree: dealing with poop.

When Ella was about a month and a half old, I happened to mention my dislike of cleaning poopy diapers to my grandmother, who, at that point, was the only person I knew in real life who had cloth diapered. She mentioned an intriguing solution. “Why don’t you just hold her over the toilet when she needs to go?”

What?! This was perhaps one of the craziest-sounding pieces of parenting advice I had heard to date. Did she seriously expect that my little baby, whose vocabulary at that point consisted of a few coos and screeches, would be able to let me know when she needed to go?

But the idea had wormed itself into my head. Over the next few weeks, I did some research into elimination communication, or EC (this website has a ton of great information for those first starting). I began to pay attention to what was going on right before she went. Turns out, she was sending me a ton of clear signals that she needed to poop: she would be gassy, her face would get red, and she would start grunting.

Ella was about 2 months old before I felt brave enough to try and get her to go on the toilet. I had no idea how I was going to be able to grab her, undress her, unsnap the diaper, and seat her on the toilet without it being a huge disaster. I had visions of her leaving a trail of that liquidy breast-fed baby poop all over my house, or it getting all over my bathroom walls.

Turns out, it went so much easier than I had thought. She started grunting, and I had plenty of time to seat her on the toilet before she went. Now that she’s older, she stops even trying to go the second I pick her up, because she knows that she is on her way to the toilet. When she was around 4 months old, we began to incorporate the baby sign for “toilet” into our routine. She'll occasionally sign that she needs to go, but this has backfired on us a bit because sometimes she simply wants to go in the bathroom and play around with the toilet paper.

There are still times when she ends up going in her diaper. But I would say that our success rate is fairly high. We are starting to work on getting her to pee in the toilet, but I find that a little harder to figure out. We have learned that she tends to pee within 5-10 minutes of waking up, and within ten minutes of nursing. On a good day, she will pee in the toilet up to five times. I think that for a baby that's only 7 months old, that's pretty accomplished.

Besides not having to clean poopy diapers, I think the best part is the sense of accomplishment Ella feels from going in the toilet. We are always sure to praise her whenever she goes, and she gets a huge smile on her face like she knows she’s done something great. Now that she’s older and has discovered her voice, she has a blast hearing her giggles and shrieks echo off the tile in the bathroom. It’s a win-win situation for our family: she thinks it’s a big game, and I don’t have to clean messy diapers. 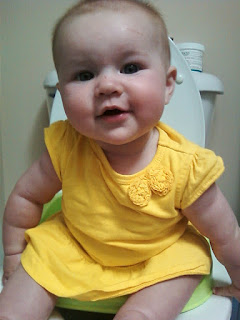 Here she is on her potty, at about 5 months old

What do you do while you’re out/ traveling? It depends. Honestly, some public restrooms are so skeezy that I’d rather deal with a messy diaper. And sometimes it’s simply impractical. If we are using a public restroom, I line the seat and then hold her over rather than seating her on the toilet. If we are staying at a hotel or visiting friends or family, our routine is the same as at home.

What supplies do you need? There is absolutely nothing that you have to buy to get started. Now that she can almost sit up on her own, we purchased a child size potty for her to use.

Is it something you do habitually and that your baby is used to? Yes. When we first started out, any time we placed her on the toilet, she would get a confused look on her face. Now it has become something that is part of our routine, as much as anything else we do together, and she finds it more natural to go on the toilet instead of in her diaper.

Does she get upset when she goes in her diaper? She does get upset, but I think it’s more because she’s uncomfortable. I think about it this way- I wouldn’t be too terribly thrilled to be sitting in a dirty diaper either.

How does it work with other people, like your husband or a sitter? Because I am a stay-at-home-mom and am around her pretty much 24/7, I am much more in-tune to her signals than other people who watch her. Jim is starting to get better at picking up cues, and knows what to look for, although he sometimes still needs pointers. That’s not to say that you have to be a stay-at-home-parent in order to practice EC- you can choose to do it as little or as often as what works for your family.
In theory anyone who watches her could practice EC. However, we have found that unfortunately it seems strange and more than a little crazy to most people we tell about it, so on the occasions where we’ve had a sitter, she is entirely in diapers.

How long do you hold your baby over the toilet? Usually she gets right down to business. If it’s more than 5 minutes and she hasn’t done anything or it seems like she’s getting frustrated, I stop. I want it to be a positive, stress-free experience for both of us, and I don’t want her to have negative associations with the toilet.

What are the benefits to EC? There are many benefits to doing EC. The most immediate benefit to us as a family is that it reduces the number of diapers that we use in a given day, which means less water and detergent used.

From what I have heard, practicing EC from early on can lead to children who are toilet trained at a much earlier age, because they are already used to using the toilet and communicating to their parents or caregivers when they have to use the toilet. I am already dreaming of that magical day when I don't have to change another diaper.

In my opinion, EC also helps reinforce the bond between baby and parent, because she can trust that I am paying attention to what she is telling me. Traditional diapering places the burden entirely on the parent, while EC creates a dialogue between parent and child.

Furthermore, EC turns bathroom time into fun time in my house. A diaper change is so prosaic- yet another chore that must be done. When she is in the bathroom, we have fun together by hearing our voices echo, making silly faces in the mirror, and singing songs. While fewer dirty diapers are a big benefit to practicing EC, seeing her smile and laugh truly is the best part.
Posted by Unknown at 11:58 AM